The aesthetics pixel art is back to stay with artists such as Daniel Benítez - video game developer and co-founder of Fourattic studio - that keeps her alive in her creations. In this course, I will teach you the techniques and processes to follow to animate a videogame character and its environment in pixel art using the Pyxel Edit tool.

If you have already completed Daniel's previous course, Introduction to character design in pixel art , in this you will go a step further by animating your creations frame by frame and learning your own animation concepts such as timing , anticipation or motion blur and processes such as export and optimization of sprite sheets . 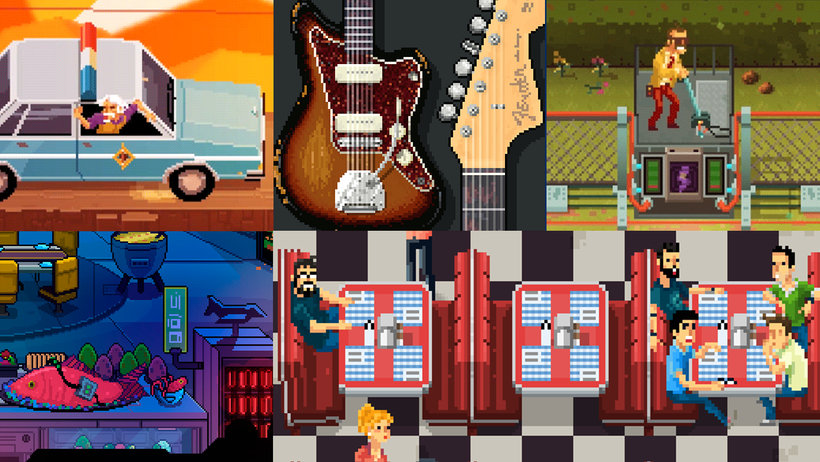 You will start by knowing Daniel, who will tell you about his career in the world of video game design and specifically in the pixel art . He will then highlight some of the animators pixel art that have influenced him most these years, as well as animators and animation studios not related to pixel art that have also marked him.

If you have not already done so, you will download Pyxel Edit and then Daniel will take you through its interface, with special emphasis on the most important tools the program has for developing animations.

You will create a project using tilesets in Pyxel Edit. You will discover what tiles and what they are used for in animation.

The first action you will cheer on your character will be the waiting or waiting animation, starting with the basic shapes and silhouettes. Daniel will explain through examples what is timing in animation, keyframes and motion interpolations.

Then you will create a cyclic walking animation. You will discover what it is and what its function is in a video game before animating your character, reviewing animation concepts from the previous lesson.

The third and final character animation you will create will be the attack. In this lesson Daniel will introduce you to concepts and techniques such as the anticipation of motion blur and easy in / out , which are essential to give quality and smoothness to the animations.

Finally, you will animate your character's environment using techniques such as modular animation and pixel-to-pixel animation.

You will animate a video game character, focusing on three of its most important states: wait, walk and attack. You will also slightly animate their environment using techniques different from those used with the character.

To designers, illustrators, animators and anyone who wishes to acquire knowledge of video game animation using the technique of pixel art .

You will need basic knowledge of character design and be familiar with Pyxel Edit or programs that offer similar features such as Adobe Photoshop or Flash.

Daniel Benítez is art director and co-founder of Fourattic, an independent video game studio. He has worked in video games such as Crossing Souls or Starr Mazer and his specialty is pixel art , a technique he has been developing since he started in the world of video games, both in professional and personal projects.

His latest and most ambitious creation, Crossing Souls, stems from the need to create something of his own, without thinking of clients, but of players. Crossing Souls is an action video game with aesthetics old school available on the most important platforms.