Learn to conceptualize and design a logo from scratch

Learn to conceptualize and design a logo from scratch

Quique Ollervides—designer, illustrator, and typographer for brands such as Google, Microsoft, MTV Latinoamérica, Cartoon Network, and Nike—walks you through the process of designing a logo, from brainstorming and sketching to vector drawing, paying special attention to font development and layout.

Start by getting to know Quique Ollervides, his work, and his influences.

Next, learn how to look for references to help you hand draw and vectorize your own logo, either designing a font from scratch or modifying an existing one to achieve the look you want.

Then, discover different ways to arrange the elements in your logo, creating horizontal, vertical, and square layouts suitable for the most popular formats today.

Finish by learning how to choose a font and a color palette to design a captivating imagotype that can either stand alone or complement your logo.

Design or reinvent an iconic logo inspired by an image, the name of a fictional restaurant, a TV series, a movie, or a book.

Designers, illustrators, and artists of any kind who are interested in better understanding the process involved in developing a logo.

To take this course, you need basic knowledge of design, typography, and drawing.

You also need pencils, bond paper, tracing paper, a scanner, and a computer with Adobe Illustrator and Photoshop installed. 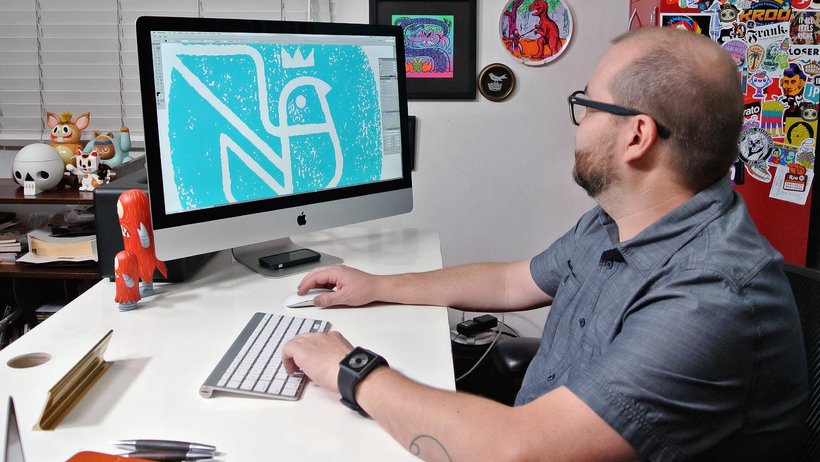 Quique Ollervides is a Mexican graphic designer specialized in typography design, branding, and corporate-identity development. His professional work spans a wide range of projects in music, entertainment, and culture, as well as collaborations with top commercial brands.

Throughout his career, he has designed a variety of brand identities, album covers, concert posters, and fonts for both personal and commercial use.

Some of his clients include Google, Apple, MTVLA, Cartoon Network, Nike, Coca-Cola, Sony Music, EMI, and Warner. He has also worked for bands such as Tame Impala, Queens of the Stone Age, Phoenix, and Molotov, in addition to festivals like Coachella, SXSW, and Cumbre Tajín.

Between 1996 and 2010, Quique cofounded and ran Hula+Hula, an internationally renowned studio known for its expertise in music, comedy, and color, as well as its passion for handcrafted artwork.

From 2006 to 2010, he cofounded and codirected KONG, one of the most important design stores in Mexico, which also doubled as an art, design, and illustration gallery. There, he organized and curated a number of artistic exhibitions both nationally and internationally.

Quique Ollervides has also taught typography and design courses at various universities, and his work has been featured in numerous books, magazines, and blogs.