Do you strive to create bolder textures in your embroideries? The raised embroidery technique will enable you to transmit more emotion and volume through a needle and thread. Textile artist Adriana Torres, the founder of the Miga de Pan brand, has been dedicated to the universe of embroidery for over 10 years. She creates unique pieces that can be found on the catwalks of many brands in Paris, London, and South Korea.

In this course, Adriana teaches you the 25 stitches that she used to create her botanical alphabet and explains, step by step, the technique behind each one to create an embroidery piece. With raised embroidery, you will create textures and effects with great visual depth, giving more expression to your creations. 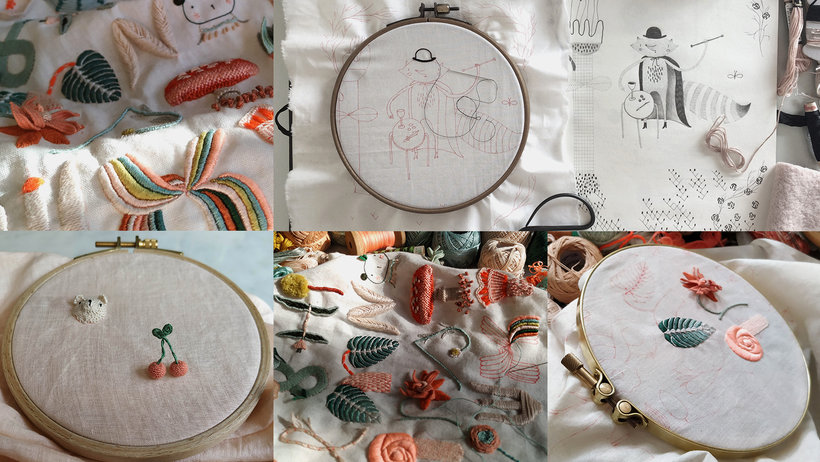 Get to know Adriana, her brand Miga de Pan, and some of the products that are already in stores across various countries. Discover her main influences: from visual artists to designers, architects, illustrators or textile artists.

Adriana helps you prepare your material, teaching you how to use different types of needles, threads and base frames. Start off by learning basic stitching and its variations in your first project.

Then, discover how to stitch raised embroidery by creating your own piece. Learn a variety of techniques such as: raised stem stitch, overcast stitch, quilted stitch, woven stitch using only needlework, cross stitch and knot stitch. Adriana goes through each one, showing you its characteristics and uses, giving valuable advice on how to take care of your embroidery pieces.

Adriana gives great tips on how to craft your final piece, showing you different combinations of stitches so you can find your own unique embroidery style.

Embroider the words “Niña Fuego” (“Fire Child” in Spanish) and create a sample of over 20 embroidery stitches using the characters of the floral alphabet Adriana created especially for this course.

Explore your creativity through a multitude of combinations in your final project, experimenting and defining your own unique style.

This course is for anyone interested in manual crafts that wants to relax and enjoy creating something with their hands. This course will benefit illustrators and artists who want to expand their visual universe and experienced embroiders who want to improve their technique and amplify their stitching repertoire.

No previous embroidery knowledge is needed for this course. If you have experience in embroidery, this course will show you a variety of techniques and combinations to further explore this craft.

You’ll need a basic embroidery kit with cotton fabric (20x20), 2 stitching needles, mouliné thread, a fabric marker, a large head pin (such as Tulip), scissors and 2 frames or embroidery hoops (one of 10-12 cm and another of 20 cm or more) to complete this course.

Argentine designer Adriana Torres has an eclectic background, as she studied architecture, graphic design, fine art, and illustration. His collection of objects received the Seal of Good Design granted by the Ministry of Industry and was selected to be part of the Argentine pavilions at 100% Design London, Maison & Objet Paris and in Pitti Bimbo, Italy. He received the first prize in the National Crafts Contest, organized by the National Endowment for the Arts.

He has collaborated with brands such as Seletti, Crate & Barrel, El Espartano and Tea Connection. His work has been published in several books and magazines, including: Stich • illo (Uppercase), Encore! The new Artisans (Thames & Hudson), Super Handmade (Designers Book) and DPI Magazine from Taiwan. Some of his works have been on the cover of magazines, such as Farnese the elephant, in Modern Decoration Home (Hong Kong) and Ander the lion, in the British magazine Embroidery.