Over the past several years, the renowned illustrator Puño has dedicated himself to teaching illustration to those who had thought it impossible to master. Through fun, simple exercises, Puño can turn a novice or out-of-practice illustrator into a creative drawing whiz.

In this illustration course, Puño gives some guidelines for composition, with a special emphasis on visual weight, to create harmonious compositions. Using geometric shapes and simple colors, you can enhance your skillset thanks to the ease and enthusiasm that Puño brings to this course.

Start learning to discover perspective, proportions, shadowing, and even color use. This course is the perfect complement to other courses that Puño teaches on Domestika like Drawing for Beginners Level -1, where he gives tips on how to tame your fear of starting with a blank page by creating an artist’s catalog, and Original Illustration with Your Hand and Tablet, where he gives an introduction to digital illustration and how to print in various colors. His newest course is Drawing and Creativity for Big Little Artists, which helps train a child’s creative skills with nothing but their hands, their brain, and some basic drawing supplies.

Puño is a joy to listen to - his passion and warmth comes through even when you're watching him on a screen. He's super reassuring and inspiring. Not only have I learned how to draw but I feel better about myself and the world when I listen to him! Thank you for your sense of humour, kindess and excellent teaching, Puño.

Start by getting to know Puño's work, discover his peculiarly effective way of teaching, and learn why practicing is so important. Learn his guidelines for composition with an emphasis on visual weight, so that your drawings are perfectly balanced. Discover the importance of lines and geometric shapes in the composition, and see how to use them as a narrative tool in your work.

Do some exercises to practice perspective and proportions. See how to apply light and shadows to your illustrations to give them more depth, going through these essential drawing techniques that drive illustrators crazy when trying to figure it out alone.

Puño also gives you some useful tips for becoming a creative illustrator, sharing techniques and warm-up exercises that will help you improve your drawing skills. Explore some original methods like the blotted line technique, which was frequently used by Andy Warhol in his advertising work.

Finally, Puño gives you some tips for sharing your drawings on Instagram and invites you to be part of a large community of artists who share their work online. Continue to improve your technique after the course by experimenting with visual metaphors and finishing a series of weekly mini-illustrations challenges that will put your newfound skills to the test.

Create an artist’s sketchbook using fun and original methods that both improve your technique and showcase your work as an illustrator. In addition, learn how to digitize your illustrations and attract more online followers for your work.

This course is for illustrators who want to learn new creative techniques for improving their work, including parents or teachers looking for something new to teach and anyone looking to be more confident with their illustration skills.

No prior drawing knowledge is necessary.

As for the materials, you'll need a notebook, paper, ink, pencils, a pencil sharpener, an eraser, paintbrushes, pens, markers, a cloth, a ruler, and a camera (you can also use your phone's camera). 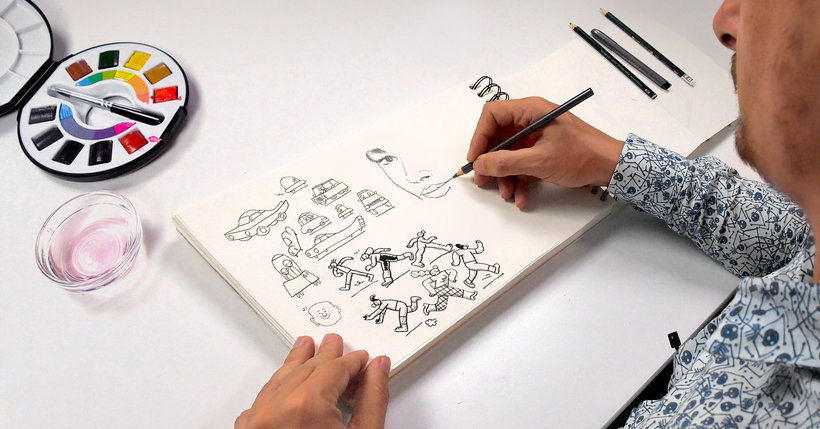 Puño was born in Madrid in 1978. He has worked as an illustrator since 1994 but didn't actually take it seriously until 2005. He is the author of several book illustrations, both for children and adults, and has published books of all kinds, including some with his poems.
He has worked in different professional fields, such as advertising, media, and animation. In his spare time, he creates a street photography series. He has lived in Madrid, A Coruña, and Paris, working for a long list of clients including Coca-Cola, Nike, Greenpeace, TEDx, BBVA, Telefonica, ING Direct, Ono, El Mundo, Kalandraka, Nobrow 8, and more.
In 2009, he won the SM Foundation International Illustration Prize and the First Creacomic CAM 2009 Award. Since 2011, he has coordinated and directed several courses in illustration and creativity, including at the Istituto Europeo di Design in Madrid.