Any work of art you envision can become a reality when you tap into the power of both analog and digital techniques and throw in a bit of experimentation.

Álvaro Tapia Hidalgo has spent over seven years doing just this, illustrating unique and inimitable vector portraits that overflow with meaning and emotion. His work has led to collaborations with renowned publications such as The New Yorker, Rolling Stone, The Washington Post, The Atlantic, ESPN, WIRED, and Newsweek, as well as big-name brands like adidas, PUMA, and Heineken.

In this course, join him to learn to create an illustrated portrait by applying both digital and analog techniques. Álvaro teaches you all the steps involved in putting together an illustration based on a photo reference using vector drawings in Adobe Illustrator along with handmade textures and layers in Adobe Photoshop. 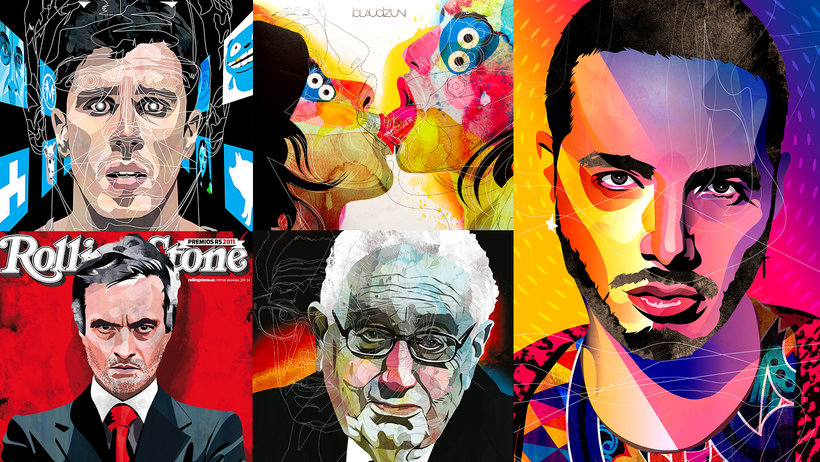 Begin by familiarizing yourself with Álvaro's work, both his commercial commissions and his personal projects, as he describes how he got his start in the world of illustration and reveals some of his greatest influences.

Prepare to tackle your project by exploring his approach to portraiture, the criteria he applies for choosing a reference image, and his method for putting together a striking color palette. Experiment freely with watercolor and ink to create handmade textures you can later digitize and apply to your portrait.

Álvaro then teaches you how to create a vector illustration by tracing over a photo reference digitally in Adobe Illustrator, how to modify key elements, and how to apply a color base.

Next, transfer your vector portrait to Adobe Photoshop to work on it in layers, adding the backgrounds and textures you painted earlier.

Enhance your illustration by refining the details and adding the final touches to achieve a stylized piece with a powerful aesthetic.

Once you've finished your texturized vector portrait, Álvaro teaches you how to polish it even further with go-to professional techniques. To wrap things up, he reveals some tips and methods to help you unleash your creativity and infuse your artwork with character and expressiveness.

Create an illustrated portrait of yourself or any other person you choose by combining vector drawings made in Adobe Illustrator with hand-painted watercolor textures and later assembling the final composition using layers in Adobe Photoshop.

Designers, illustrators, and all art lovers who want to explore new ways to create illustrated portraits with mixed media.

You don't need any prior drawing experience; Álvaro teaches you a foolproof method you can use to develop your illustrated portrait using a photo reference. However, you do need basic knowledge of Adobe Illustrator and Photoshop.

As for materials, you need a computer with Adobe Illustrator and Photoshop installed, brushes, paper, watercolor, ink, a roller, and a scanner.

Álvaro Tapia Hidalgo is a graphic designer and illustrator from Viña del Mar, Chile with a degree in design from La Universidad de Valparaíso and another one in film from La Escuela de Cine de Chile.

He spent over a decade working on graphic-design projects as an art director while also tackling audiovisual projects as a film director and post-production specialist. In 2011, he decided to focus exclusively on illustration, combining traditional and digital techniques to achieve his own distinctive style.

His work has been featured in international publications such as The New Yorker, ESPN, Rolling Stone, Billboard, Newsweek, The Atlantic, and New York Magazine, and he has also collaborated with top brands like adidas, PUMA, Heineken, Mahindra, Atomic, and Marc Ecko. Additionally, his work has been displayed in a number of exhibitions, galleries, and museums in countries all over the world, including the United States, Germany, England, Italy, the Netherlands, Colombia, Croatia, Argentina, Spain, and Chile.

A course by Kamui MG

Master the most powerful graphic software's tools to paint pieces that are ready to be published in editorial, web, or audiovisual formats