There are few Spanish-speaking artists who can say that they have gone through their hand characters such as Deadpool, Wolverine or Hulk. Salva Espín, with more than twenty Marvel comics behind him, is one of them and, in this course, will teach you the basics of sequential narrative, as well as his process to draw superheroes.

Discover the graphic, narrative and technical processes behind the creation of a comic by the hand of one of the most awarded and prolific cartoonists of the Spanish scene. 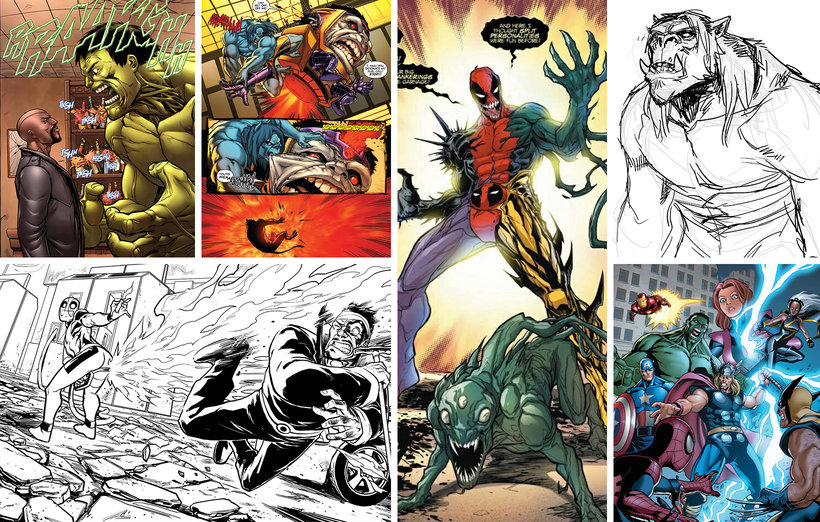 You will begin to know Salva and his trajectory in the world of comics, which has led him to work for Marvel since 2007. You will also know his influences in the world of illustration, from Dragon Ball to Street Fighter.

You will see a brief introduction to the language of the comic, seeing the basic structure of a script - accompanied by real examples - the types of plane, angles, the order of reading and the types of vignette within the sequential narrative.

You will review the materials to be used to draw your comic and the role of each one in the process.

Following the pre-production, you will do a search for references for the design of your characters, taking into account universal codes of colors and stereotypes, when to break them and when not. You will sketch the secondary character.

You will learn how to design a comic book page, facilitating its reading. Then you start with the sketch of the characters, starting with simple geometric figures. Then you will pass your sketch in pencil.

You will scan your comic pages to be sent to inking, coloring and adding texts. Salva will give you tips to retouch the scanned image in Photoshop and then export it in the correct format.

Finally, Salva will give you a series of tips that you only know if you work in Marvel, with respect to nudity, violence, double articulations and how to make a character appear to be submerged under the sea.

You will draw 2 comic pages based on a script provided by Salva.

To people interested in drawing and specifically in the world of comics.

You will need basic knowledge of drawing, human anatomy and ease of abstraction for the composition of images.

TeacherPro
Illustrator and comic artist
Follow
On Domestika since 07.27.2018

Salva Espín is a cartoonist, illustrator, cartoonist, portadista, prologue and comic inker born in Murcia (Spain). He has been working as a cartoonist for Marvel Comics since 2007 and, since 2012, he is the official artist of the irreverent Deadpool.

Through his hands have passed characters as important as Wolverine, Hulk, Spiderman or Captain America, in addition to the aforementioned Deadpool and his more than twenty comics for Marvel make him one of the most prolific cartoonists of today.

In 2013, he opened his comic store, 7Heroes, in Murcia, a real tribute to the world of comics, where they are sold, as well as comics, letters, retro video games and table games.