A course by Jorge Alderete, Illustrator and designer

A course by Jorge Alderete

Jorge Alderete -designer, illustrator and graphic artist- has spent more than 25 years dedicating his art to music. His illustrations can be found on album covers, posters and set design, and it is also common to see him illustrate live in the shows of the band where there is the theremin, Sonido Gallo Negro.

Alderete enjoys exploring techniques and forms of creation, as this allows you to obtain new graphic results. In this course you will discover your work process to make a rock poster, a support that has become one of your favorite means of expression for the freedom it offers when it comes to expressing your ideas on paper. You will see how to create a poster from the sketch to the final design and give you some tips to turn it into a 3D anaglyph image. 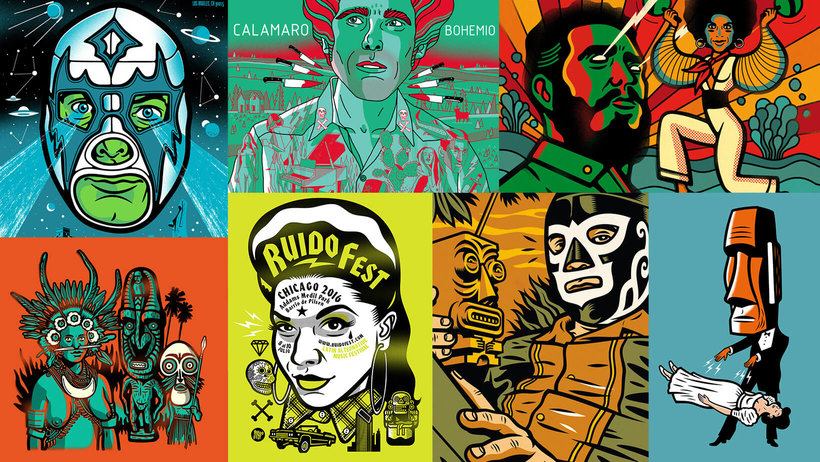 You will begin by getting to know better the work of Jorge Alderete, who will also tell you about his influences and will show you his personal vision of what the rock poster is and what it means.

You will immerse yourself in their creative process, accompanying Alderete in the search for references to design the poster and make the first sketches.

Once you have defined the idea, you will vectorize your illustration, in order to apply color and textures digitally.

Later you will add the typographic elements and you will make a study of the composition.

You will see how to prepare the files to print in offset and with serigraphy.

Finally, Alderete will tell you what the anaglyphs are, what a stereoscopic image is and how to turn a flat poster into a 3D image.

You will design a poster for a rock concert, prepare it for printing and turn it into a stereoscopic image with 3D effects.

Illustrators, designers, graphic artists, cartoonists and anyone interested in learning new methods to create posters that will not leave anyone indifferent.

It is advisable to have basic knowledge of drawing and composition. In addition, you should know how to use a vector design program.

With respect to materials, you will need paper, pencil, a computer with a vector program and Photoshop, and a pair of 3D glasses.

Argentinian by birth, Alderete traveled from Patagonia to La Plata to study Design in Visual Communication at the Faculty of Fine Arts of the National University of La Plata and since then he has embraced his passion.

His work has been published in several specialized anthologies such as Illustration Now and Latin American Graphic Design (Taschen); Illusive, Pictoplasma, The logos series, Latino and Play Loud (Die Gestalten Verlag); Place (Actar), Kustom Graphics (Korero), among others; and his work has been exhibited in galleries and museums around the world.

He is the founder, along with Juan Moragues, of the record label Isotonic Records, specialized in instrumental rock, and is part of the musical group Sonido Gallo Negro as thereminist and illustrator live during the shows. He has designed more than 100 albums for groups such as Los Fabulosos Cadillacs, Andrés Calamaro and Daniel Melero, Lost Acapulco, Twin Tones and Los Straitjackets.

In 2008 he published his book Yo soy un nadie nadie , with which he celebrates his first 10 years at CDMX. A year later, together with Clarisa Moura, she founded the Vertigo Gallery. In 2012, two books are published that compile his work Sonorama and Other Yo . At the end of 2014, together with Harkaitz Cano and the Basque musician Fermín Muguruza, he published his first graphic novel Black is Beltza .

Since 2015 he is a member of AGI (Alliance Graphique Internacionale).

Did you get this course as a gift?