Illustration for Comics: Anatomy of a Superhero

Learn to draw the skeleton, muscles, and poses to convey the true power of your characters

Learn to draw the skeleton, muscles, and poses to convey the true power of your characters

Every story has a classic hero who performs extraordinary feats, but there is one character who pips them at the post when faced with unimaginable threats: the superhero! Their superhuman powers are shown in their abilities, but also in their anatomy, which is something that comic book artist Ariel Olivetti has been studying since 1993, working for publishers such as Marvel and DC Comics.

In this course, learn how to draw the superhero anatomy used in comics, getting to grips with the proportions of the human figure, the main muscle groups of the body, and the different poses. 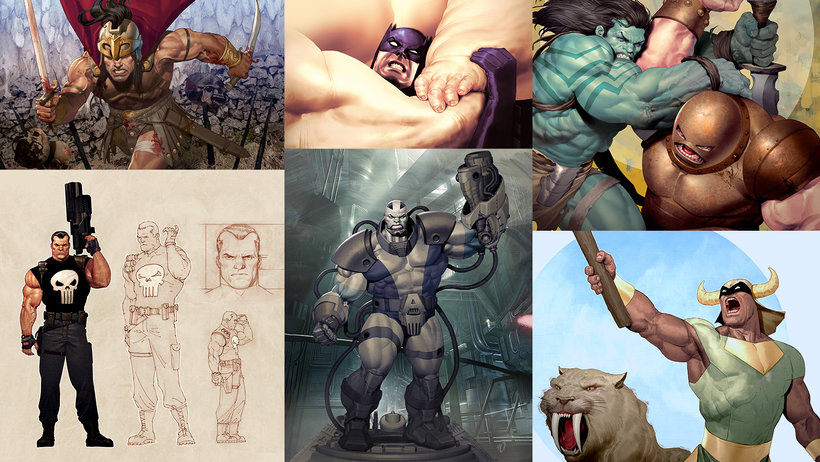 Kick off the course by learning more about the work of Ariel Olivetti, who tells you about how he started out as a professional comic book artist and what has influenced him the most in his career to date.

Learn the different proportions of the human figure to be used in building your character, whether it's a person of normal proportions or a superhero. Discover his method for building a head, from the internal proportions to the main features.

Look in closer detail at the different muscle groups that make up the body and how they are drawn. Get more familiar with the mechanics and functioning of the muscles of the torso, arms, legs, and hands to achieve an exaggerated yet realistic result.

Then, hone in on some superhero poses. Ariel shows you how to use a mannequin with different proportions as a reference and position it in your desired poses before explaining how to add the muscles.

To wrap things up, learn how to introduce light and shadow to your superhero to give a more realistic feel to your drawing.

Create a full illustration of a human superhero figure, from the skeleton to the muscle groups.

Illustrators, visual artists, comic book artists, and anyone who wants to learn about superhero anatomy to show the true power of their characters.

To take this course, you need basic knowledge of drawing.

As for materials, you need a pencil, paper, and an eraser.

Ariel Olivetti was born in Buenos Aires, Argentina, and studied graphic design at the University of Buenos Aires. It was his passion for drawing the human figure and creating characters that led him to design covers for the prestigious Argentine comic magazine FIERRO in the 90s as well as to cocreate the comic strip El Cazador. He has been working as a comic book artist and illustrator for more than 25 years, publishing in different editorial magazines such as Dark Horse, Valiant, Sideshow, MARVEL, DC Comics and Upper Deck.

His first work for the United States market was for Marvel Comics with The Last Avengers Story, and later for titles like Daredevil and X-Men. He has also collaborated on a limited DC series called Space Ghost. Other titles he has worked on include: Sabretooth and Mystique (1996), Alpha Flight (1997) and What If? (1997) for Marvel; and JLA: Paradise Lost (1998), Haven: The Broken City (2002), Green Lantern (2003) and Batman: Legends of the Dark Knight (2006) for DC.

Illustration for Comics: Anatomy of a Superhero

A course by German Gonzalez Ramirez

A course by Marmota vs Milky