Is drawing something you've always wanted to learn how to do but you don't know where to start? In this course by Puño —illustrator and teacher— you'll learn the keys to becoming a drawing expert, regardless of your starting level or age, through a new, rational, and playful approach to drawing.

In this course, there are tons of dynamics and exercises designed to help you understand each of the thought processes involved in learning how to draw. These exercises will also serve as practice and as an instruction manual to help you create and complete your final project: your very first sketchbook.

This course by Puño is the perfect addition to his other online courses Original Illustration by Your Hand and Tablet, where he teaches digital drawing and printing, From Amateur to Superillustrator, where you'll improve your drawing skills, and Drawing and Creativity for Big Little Artists, a course designed to practice creativity using just your hands, brain, and some basic tools. 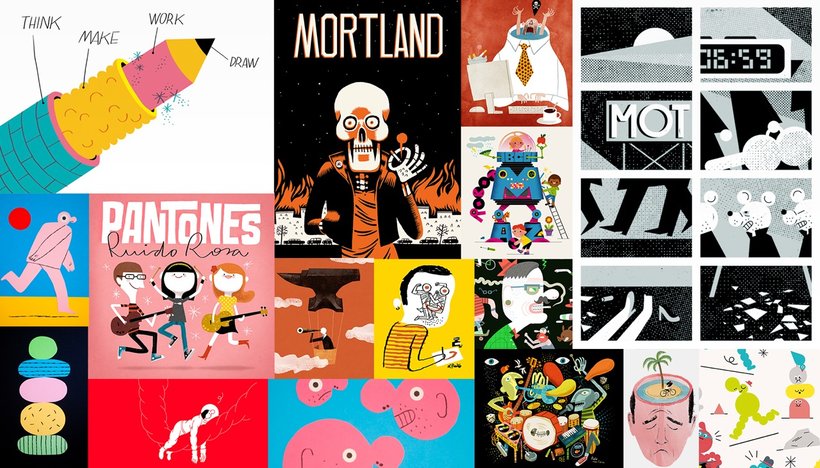 I really enjoyed this course. It made me start drawing and that is something I was trying to do on my own for some time now with little success.
For me the main gain of this course was to give me pointers of what I can do with the blank page with the combination of knowledge that I had and the knowledge that I gained during this course and to motivate me to learn more.

You’ll start by getting to know Puño and his work, as well as his love for drawing and his experience as a teacher.

He’ll show you some ancient references, based on neuroscience and creativity that will motivate you and serve as a conceptual foundation.

Once these first concepts have been laid out, you’ll enter the proto-drawing phase. In other words, you’ll practice simple drawing techniques. You’ll illustrate a hand, create patterns until you fill a piece of paper, and make a collage by drawing on magazine scraps.

At this point, you won't be afraid of pencils anymore, and the next step will be to learn what Puño calls the artist’s ABCs: geometric forms, gestural expressions, literary resources applied to the visual side of things, and games for two or more sketch artists.

You’ll then do some restriction exercises, you’ll learn how to draw in the streets, and some games to play with other sketch artists, such as yourself.

By the end of the course, you’ll have your own sketchbook, where you’ll be able to appreciate your progress and share it with others. The idea is to record a video of your sketchbook, and publish it online to attract followers to build an audience.

This course is designed for people who want to start drawing, teachers and parents who want to come up with new activities, and anyone who just wants to have fun and use paper and pencils to escape for a while.

To complete the course's exercises, you’ll need a notebook, pencils, colored markers, a ruler and templates with geometric shapes, adhesive tape, old magazines, and sandpaper. Optionally, a printer, ink, brushes, and watercolors would also be nice to have.

For the final project, you’ll need a camera that can shoot videos and an internet connection.

Puño was born in Madrid in 1978. He has worked as an illustrator since 1994, but he didn't take it seriously until 2005. He has done several book illustrations, both for children and adults, and has published books of all kinds, including some with his poems.

He has worked in different professional fields, such as advertising, press, and animation, and in his spare time, he makes street photography series. He has lived in Madrid, Coruña, and Paris, and has worked for almost every imaginable client, such as Coca-Cola, Nike, Greenpeace, TEDx, BBVA, Telefonica, ING Direct, Ono, El Mundo, Kalandraka, Nobrow 8, among others.

In 2009 he won the SM Foundation International Illustration Prize and the First Creacomic CAM 2009 Award, and since 2011 he has coordinated and directed several illustration and creativity courses, especially at the Istituto Europeo di Design in Madrid.